When the COVID-19 pandemic led to the shutdown of college campuses, and a transition to online courses, nearly all universities across the U.S. that offer a summer Field Geology class canceled the course or offered an online version instead. Missouri State University (MSU), which usually sends senior Geology students to New Mexico or Colorado deep in the Rocky Mountains for GLG 413 – Field Geology, instead developed an alternate version of the course to be held locally in the beautiful Ozarks. GLG 413, a required six credit hour, six-week intensive summer course, is not just a rite of passage for geology majors but also a course that can make or break a job interview for recent graduates – many employers prefer geology graduates who have completed an in-depth field geology course, and it’s also frequently a requirement for professional state licensure. From 1980-2017, MSU didn’t offer its own field camp course; students utilized field courses offered by other universities to fulfil this requirement. In 2017, MSU resurrected Field Geology with Dr. Matt McKay, Assistant Professor of Geology, serving as the Field Camp Director.

When it became obvious that a trip to the Rocky Mountains for such a large group of students and faculty was out of the question this year, and in an effort to give MSU graduates the best footing for entering the job market, McKay decided instead to work with MSU administration to develop an alternate version of the course that could be offered safely amid concerns about social distancing, while still providing students hands-on, professional-level field experience, all close by.

SELECTED FOR YOU:  A MESSAGE IN REGARD TO COVID-19/ESSENTIAL BUSINESS OPERATIONS

McKay enlisted the help of MSU alum Bobbilynne Koepke, a Principal Geologist with Environmental Works, Inc. (EWI). EWI is headquartered in Springfield, Missouri, and was founded by MSU alumna Robin Melton in 1992; Melton passed away in a tragic plane accident in 2012. The company has now grown to 10 offices across the Midwest and employs over 230 people, many of whom are also MSU graduates, including current president Jason Smith. McKay also reached out to Matt Forir, Greene County Geologist and Executive Director of the Missouri Institute of Natural Science. The Institute is well known in the area for its affiliation with the Riverbluff Cave, which was discovered while blasting for a new roadway on September 11, 2001.

Development of the course posed many challenges, from ensuring the safety of students and staff, to developing exercises in a matter of months that visited geologically interesting and useful areas the students had not already been exposed to during their previous coursework. Because Riverbluff Cave is currently used for research, access to it is limited; therefore developing an exercise around this feature helped ensure students a unique experience. Meanwhile, EWI provided access to a drilling rig and helped develop professional quality exercises around a “real-world” project to give the students a feel for the career fields they’ll soon be entering. Anthony Moore, Senior Manager at EWI, also gave a case study presentation to the students about environmental investigation work done by EWI on the now Jordan Valley Park in downtown Springfield. 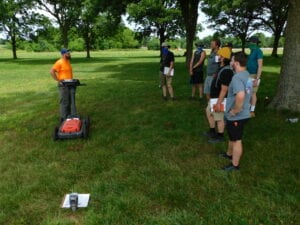 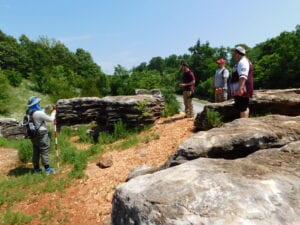 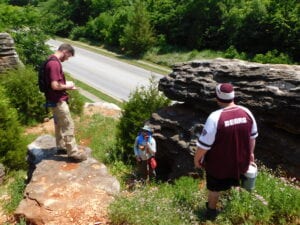 Bobbilynne Koepke (in yellow vest), shows some students rock cores pulled from the ground at Darr Agricultural Center during an EWI drilling demonstration. Jeff Birchler, Watershed Center Coordinator at the Watershed Committee of the Ozarks, leads the students on a tour of Jordan Creek Underground in downtown Springfield.